A Woman’s Life During the Gilded Age. Book Review 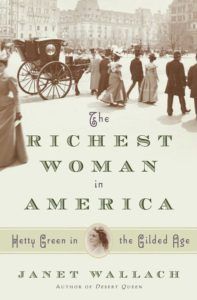 The Richest Woman in America: Hetty Green in the Gilded Age

Hetty Green (1835-1916) is not a well known name now but during the Gilded Age she was considered quite notorious. She was notorious partly because she was a sharp and savvy investment broker, one of the few women in a man’s world. The other more important reason was that during the time of the Gilded Age when glamor and ornateness was the order of the day, Green chose to live as frugally as possible to the point that others called her the “The Witch of Wall Street.”

Janet Wallach, author of Desert Queen: The Extraordinary Life of Gertrude Bell, explores Green’s life – a woman’s life during the Gilded Age –  as well as the public perception of her in which her simplicity and business-like demeanor contrasted with the wealth for wealth’s sake of most of her peers. Green saw earning money as a means to an end to live comfortably, to earn more, and to save instead of spend.

Wallach goes into great detail on how Green’s childhood shaped her desire to earn and keep money according to her own terms. Wallach writes about Green’s Quaker faith which was inherited from her family. The Quakers, AKA, The Society of Friends, was a religious faith that encouraged personal connections to God, for members including women to teach and hold Meetings in their homes, to practice non-violence and do good works, and above all to live a simple life. These values stayed with Green for the rest of her life particularly to live as simply as possible without any frills and to spend money only for necessities.

Into adulthood, Green stuck to that simple frugal living even after she acquired immense wealth. She was known to wear basic black dresses and scant jewelry or accessories. Instead of living in a luxurious mansion, she traveled from one hotel or boarding house to another. She was known to be the bane of many merchants and sales clerks because she was a haggler and always negotiated for the lowest prices. Instead of dining at fancy eateries like Delmonico’s, she ate at restaurants with bare tabletops. Green was the original Extreme Couponer.

While many men were praised for their economic lifestyle, Green was called “mean” for her efforts and the majority of the articles focused on her presumed miserliness and eccentricities rather than her business sense and intelligence in running her own money and investments.

Green’s relationship with her parents also shaped Green’s behavior. Her father, Edward Mott Robinson was disappointed that his eldest child was not a boy and made no secret about it throughout young Hetty’s life. Despite his disappointment with his daughter, Robinson proved to be a business model for her. Robinson was the head partner of the Howland whaling firm and presided over the Bedford Commercial Bank in their home of New Bedford, Massachusetts. Green watched as her father conducted business, negotiated with partners, assessed inventories, and inspected the ships. Hetty took mental notes that led to her own business career.

Thanks to her father’s business influence, Green grew to become an excellent businesswoman. She invested in companies and studied the market fervently. She often behaved contrary to many of the other brokers. She bought when others sold and sold when others bought. She kept a clear head during financial panics and made sure to have enough on hand for those times. Because of her gender, she behaved twice as tough with employees and partners so she couldn’t be accused of being “a sentimental female.”

Hetty’s mother, Abby Slocum Howland Robinson was a cold unemotional woman who expressed no affection towards her daughter. This lack of affection continued after she died and left her estate to her husband and very little for Hetty. Her father insisted that he keep Hetty’s scant inheritance resulting in an estrangement between father and daughter. The estrangement lasted during her father’s illness and death which even though Hetty nursed him, his will also left Hetty with little money and none of the principal.

Hetty was very close to her maternal aunt, Slyvia who encouraged Hetty to fight her father for her share of her Inheritance from her mother. However, Hetty also had a bad temper and argued with her aunt as much as her parents. So while they were close and Sylvia gave her the attention Hetty needed, they often fought.

One of the most tense battles was over Aunt Sylvia’s will. Determined not to go without a third fortune, Hetty discussed her dying aunt’s financial arrangements and goaded her into creating a will leaving her the bulk of her estate. After Sylvia died, she left another will that dismissed Hetty. With her then fiance, Edward Green and her attorney, Hetty contested the will until they found the original will which left the estate to Hetty. However, Hetty was held under scrutiny by people who believed she forged the will and she was often taken to court to prove her status as legal trustee of her aunt’s fortune.

Her relationship with her parents and her aunt gave Hetty Green the self-sufficiency and discipline to live independently and to expect very little support from others that included her marriage to Edward Green. While Edward was declared President of the Green’s business, there was no doubt who was the real head of the company.

Green paid attention to new speculation  deals like real estate and the railroads and convinced her husband to invest in them.  She invested the interest from her father’s trust fund and used her money to earn a high yield, paid in gold, in U.S. Civil War Bonds.  She then reinvested the dividends, compounded her returns, and earned more money that way.

Edward and Hetty’s marriage was cause for friction partly because of their differing views on spending money.

When the Green’s returned to Edward’s hometown of Bellows Falls, Vermont after living in New York City and London, they were the cause of much admiration and derision. Upon her arrival in Bellows Falls, Green was the recipient of much gossip particularly because of her legendary thriftiness and temper. Green argued with her mother-in-law and considered such things as a maid in a starched clean uniform as frivolous. She was so certain that shopkeepers, doctors, and others raised their prices when her maid, Mary, bought goods and services in Green’s name that she insisted on sending a friend or going shopping herself rather than sending Mary who she felt was too gullible for the task.  It was rumored that she bought bags of Graham crackers because they were cheap and insisted on free bones for her dogs. Around Bellows Falls, Green was derided as stingy and mean to the embarrassment of her husband.

The Green’s disagreements became physical when after Edward’s mother died, Green replaced the ornate dinnerware that they had been willed with a plain simple set. Irate, Edward threw his goblet across the table and stormed out. When Edward’s stocks fell, Green put his mother’s things up for auction to save him as long as she was declared executor of her estate. While Edward agreed, this was another cause for friction in their marriage.

Wallach also saw blame on Edward’s part for the decline of their marriage.

Edward was a womanizer and on his frequent business travels, he had plenty of female company. Green might have let her husband’s wandering eye slide but he recklessly spent money and that was unforgivable to Green.

Unlike his cautious wife, Edward was a risk taker and speculated in shady land deals and bad investments. He also was involved in a costly battle against railroad baron Jay Gould. Gould tried to buy shares and enhance his own Union Pacific and Missouri Pacific Lines to corner the railroad lines including the Green’s invested line, L&N. When Edward’s colleague, C.C. Baldwin was charged with business irregularities, he confessed that he borrowed more than he earned and falsified documents to cover up the $5 million that was lost from L&N. The directors, including Edward,  were forced to make up the cost. Edward sold more shares and the deed to the Green’s Bellows Falls home to make up for it.

lost money and lost confidence from Green. Even though the two remained legally married until Edward’s death, they separated only to communicate through business associates and their two children, Ned and Sylvie. Green made it clear that her husband disappointed her but she provided him with an allowance and kept him on the Board of Directors as a mere honorary position.

However, Hetty continued to analyze assets, studied the costs, and traded various investments such as Reading Railroads, real estate land mortgage, and her accounts. Without Edward, Green earned more than she had in the past and managed to keep most of it due to her strict lifestyle. In fact many weren’t aware how much money or stocks she had until after she died.

Green had a lot more success in instilling thrifty behavior in her children. Instead of being the living embodiments of Gilded Age Affluenza, she dressed them in hand-me-down clothes and was adamant that they save their money. Ned in particular inherited his mother’s business savvy. A childhood accident left Ned crippled in one leg, however he was a successful businessman because like his mother, he paid attention to his investments and which way the stocks were going to go.

Ned lived more extravagantly than his mother, but was obedient to a fault. Even though he had a longtime girlfriend, Mabel Harlow, he honored his mother’s wishes to wait until after her death to marry her.

Sylvie was also not a businesswoman. Instead her goal was to marry someone well-off and her mother helped her pursue that goal. She had her debutante season, but not much came of it. Ultimately, Sylvie married Matthew Astor Wilkes to her mother’s delight.

Green’s later life was mired in litigation. She discussed cases with her attorneys and she was involved in various suits. Some settled quickly while others stretched for years. Some people believed that she was crazy and used her litigious nature as a symptom of her perceived insanity, even though many of her male peers were involved in suits with the full intent of earning money and keeping it from shifty partners and opportunistic relatives once the wealth was earned.