Exploring the Corporate Strategy of the Big Four: Book Review 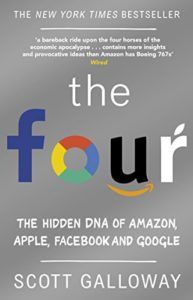 The Four: The Hidden DNA of Amazon, Apple, Facebook, and Google

We know these Four Horsemen of the Apocalypse. They are a part of our daily lives. We may hold their creators under suspicion and grumble about their unfair practices, but we can’t cut ourselves off from them. We may own and could be right now talking or texting on our Apple iPhone. We might be Googling information about movie times or heard something on TV and wanted to learn more about it. We may be on Facebook to follow up on a relative and then go on Amazon to look for a good birthday gift for that relative.

The omnipresence of these companies is the point, said Scott Galloway, NYU professor of the Stern School of Business and author of this insightful book The Four.

Exploring the corporate strategy that Amazon, Apple, Facebook, and Google used to become the top tech companies and to dominate the world around us, Galloway believes that, because of their constant presence in our lives, we can’t cut them from our lives.

We could not have a Facebook account, but that won’t prevent others in our lives from getting accounts. True, we could shop in stores instead of online, but we still may go online to compare prices.

Like it or not, tech companies will be a part of us. We can’t avoid them, so Galloway’s book shows that instead, we can learn about them, how they conquered their world, and how we can adapt to the world that they made.

Galloway divides each of the companies by their strategies and how they used disreputable means against their competitors. He also compares the companies to parts of the body as they fill needs in our lives for consumption, sexuality, society, and intelligence. They are:

Galloway writes that the online retail giant satisfies our desire for consumption and buying things. He compares Amazon’s customers to the early hunters and gatherers who scouted options before they made their kills.

One strategy they used is to conquer the various forms of retail including implementing such additions like Prime to increase viewership, Go for the bricks and mortar experience, and Alexa to give verbal confirmation of what they are looking for.

Amazon also merges competitors. If a private company sells a product, Amazon undercharges, then buys the competitor out, so said competitor now sells its product through Amazon. This was the fate suffered by Marc Lore who founded Quidsi.com, an online retailer that sold diapers and other baby items only for it to be bought by Amazon founder Jeff Bezos in 2011.

Amazon appeals to our fingers and stomach, our desires to buy things to fill our bodies and fill our basic needs for consumption.

Where Amazon appeals to the common person, Apple appeals to our most luxurious side, the side that doesn’t want just anything but the best of everything. Galloway writes that the impression that Apple sold to potential customers was that it was innovative such as the ideal they sold in their famous Super Bowl ad in which a woman representing Apple strikes a hammer into Big Brother aka IBM.

That image played into Steve Jobs’s goal to appeal not necessarily to everyone but to the highest common denominator, those that perceive themselves as rebels, elitists, and are willing to pay money to prove it.

Apple offers brands such as iPhones, iPods, iWatches, etc. Things that tech-savvy people want but only 1 % can afford. While many think that might kill most businesses, Galloway writes that the exclusivity is the point. People pay more if they perceive the products are high quality.

While Apple started out in the head, instead the body part that is comparable to Apple, Galloway believes is the genitalia because buying these items fills our lust to be the sexiest, strongest, and the best.

The social media juggernaut appeals to our need to belong and be accepted. Galloway points out that many users give an “airbrushed account” of their lives showing happy memories, their items, and filling other users with envy. He also points out that single people are more likely to connect with others on Facebook forming a network of friends and like-minded group members.

However, Galloway’s book shows the downside of that inter-connectivity. People are willing to give data and information that can be used for advertising purposes as well as to violate privacy. (Galloway hints that Facebook is also able to monitor private conversations.) Also, Mark Zuckerberg achieved dominance by buying other social media outlets like WhatsApp and Instagram to kill the competition.

Facebook is connected to the heart, the seat of the emotions. Galloway writes that humans are social creatures, so Facebook fills that need to belong. We communicate with old friends, catch up on schoolmates, keep up with relatives, network groups with shared interests, and even find job opportunities including freelance clients.

The search engine offers a more esoteric ideal. Galloway compares it to a religion in which users ask the big questions and as if by some supernatural means receives answers.

Galloway writes that the questions people ask of Google are almost confessional things they don’t ask anyone else. (“How can I tell if my lover is cheating on me?” “Is there a God?”) By God (or by Google). The algorithms supply the answers based on keyword terms or trend clicks.

Of course, there is less magic or divine intervention involved. The Google chapter is filled with examples of paid revenue to boost click searches and making search terms so vague that they appear regardless of what we are searching for. Also, like the other three, Google seeks to conquer various forms of information such as locations with Google Maps, geography Google Earth, and astronomy Google Sky.

Soon Galloway predicts there won’t be a place, person, or thing that isn’t quantified by the search engine behemoth. They may even predict questions before they are asked by using the algorithms based on previous search terms to create potential future answers.

Google is connected to the head. Google provides us users with information to analyze the answers and learn whether it is useful in our everyday lives.

Galloway also presents the Reader with the T Algorithm, the blueprint which the Four follow to dominate the tech fields. The eight steps include Product Differentiation (providing a recognizable name and removing the competition so it’s not just the best game in town, it’s the only one), Visionary Capital, Global Reach, Likeability (We know the names of the Four’s founders including their private lives. Knowing the person gives a face to a corporation), Vertical Integration, AI-naturally, Accelerant, and Geography.

The Four says that the strongest competitions the Four Stooges have are with each other. Both Amazon and Apple have voice automated control systems in Alexa and Siri. Google and Amazon are in direct competition for search items (After all if searching to buy something ends with Amazon, what’s the point of Googling for further information?) Also, Amazon and Facebook’s dabbling in entertainment puts them in competition not only with each other but other entertainment outlets like Netflix, Hulu, and others.

There are also hints that there may be a Fifth even a Sixth Horseman on the horizon. Galloway throws out potential new innovators like Alibaba, Tesla, Airbnb, and Uber which like their predecessors fill needs by providing high-quality searches and items, and fill needs to make lives easier and convenient.

There are also old sawhorses like Wal-Mart, Time Warner/AT&T/Comcast/Verizon, IBM and Microsoft that may be down because of factors such as increased online shopping, aging brands, corporate mergers, and stricter monopolizing laws but are not out.

While the outlook is grim, no good non-fiction book is complete without advice on how to counter these dismal prospects. Galloway does just that. He gives the Readers advice on how to adapt themselves to the tech-savvy world, these Four companies are giving us. Such emotional factors such as maturity and curiosity help users to adapt and learn as well as competitive spirit allows us to be aggressive in promoting ourselves and products in the increased technological world.

He also suggests going to college, receiving certification, and moving to urban environments to open up those better targets and educating ourselves. He also reminds us to stay loyal to people, be strong in our goals, and to go where our skills are needed to find that network of willing clients that need the services that we provide.

Galloway also reminds us to promote ourselves and manage our careers. Yes, that includes using the Four Horsemen and their ilk to work with us not against us. Many writers use Amazon to promote their works. LinkedIn provides resumes and professional contacts, and many have used Facebook to recruit clients for businesses from jewelry making, to catering, to (ahem) book reviewing and editing.

Who knows maybe that person could then create Horseman #7?