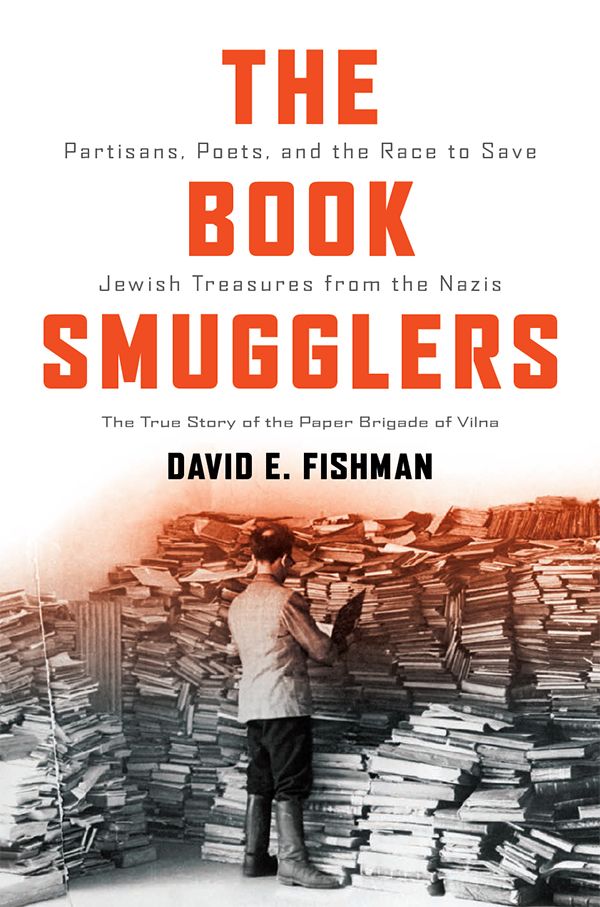 The Book Smugglers: Partisans, Poets, and the Race to Save Jewish Treasures from the Nazis

The book Smugglers: Partisans, Poets, and the Race to Save Jewish Treasures from the Nazis by David E. Fishman tells of a small group of people in the ghetto of Vilna, Lithuania, who saved several books, primary sources, artwork, music sheets, and writings from destruction. Without the dedication, intelligence, and courage of these men and women, these pieces would have been destroyed and a large part of the Jewish legacy may have been lost forever.

Before WWII, Vilna was known as the “Jerusalem of Lithuania,” for being a hub of activity and learning of the Jewish culture. It was also the location of YIVO, an organization that began in 1925 to maintain an archive of Yiddish language and books, articles, and other sources of Jewish culture.

In 1939, Soviet forces took over Vilna. YIVO was allowed to exist independently, and the collection remained intact.

The slight freedom that YIVO had under the Soviets was to end. The village was later occupied by the Germans and forced to follow Nazi rule. The Einsatzstab Reichsleiter Rosenberg (ERR) was formed to steal and destroy the Jewish culture, and they entered Vilna in 1941.

Led in Vilna by Dr. Johannes Pohl, a former Catholic priest who was drawn to Nazi philosophy, the ERR’S goal was to gather not only the Jewish archives in Vilna but in other nearby towns, sort them, and send some to the Institute for the Study of the Jewish Question (to be used and taken out of context for the Nazi propaganda machine). The remainder were to be pulped. Pohl solicited members of YIVO to help with the sorting.

Incensed, the members of YIVO decided to resist the orders. A courageous group dubbed “The Paper Brigade” engaged in resistance by refusing to work, reading aloud from the soon to be destroyed works, then smuggling the books to safety.

The book is filled with ingenious methods in which the Paper Brigade used to hide these treasures from destruction. Some smuggled them out of the village on their person, such as “wearing” the documents underneath their clothing. Others hid them in packages and delivery bags underneath regular non-contraband items.

Some members hid them with colleagues outside the ghetto who, in turn, hid them as well, such as a librarian who hid the YIVO materials in plain sight with the library’s collection. Other methods involved hiding them in storage spaces and attics around Vilna.

As a last resort, some members sent the items to Germany, reasoning that if they were being used in the wrong way, at least they weren’t being destroyed. Then after the War, they reasoned that the works could be reclaimed. Through their actions, the Paper Brigade saved 30-40% of Vilna’s archives.

Fishman personalizes the various members of the Paper Brigade turning them into individuals with positive and negative personality traits that sometimes clashed, but were always aware that they worked together for a common cause: to preserve the art, literature, and history of a culture that was slowly being destroyed.

Each member had their own story of sacrifice and struggles that they endured, as well as the contributions that they made to the Brigade.

Herman Kruk, organized the materials and was an important leader in not only the Paper Brigade but in the Vilna community. Director of the Grosser Library, the largest Jewish lending library in Warsaw, Kruk was removed from his job and spent a month on the run before he arrived in Vilna.

Dedicated to his library career, when he landed at the Vilna train station, he instantly assessed Vilna’s library catalog and collection before he found a place to settle for the night. He organized and categorized the ghetto library to ease collection access for the residents. Many of the residents read the library’s collection for escapism and to study history. They considered the library a safety net from the oppression outside.

Kruk was extremely loyal, not only to the pursuit of knowledge but to his family also. Even though he had many friends who wanted to help him escape to the United States, Kruk refused. He wanted to look for his wife and his son, whom he had been separated from before he entered the ghetto.

Kruk was not only organized in his work but in his personal life as well. Many residents described him as a fussy man who always made sure his nails were filed, and his shoes were polished.

One of the achievements that Kruk accomplished at the ghetto library was to staff the library with the few remaining professionals who remained in Vilna. One of those professionals was Zelig Kalmanovitch, scholar and co-director of YIVO. Unlike Kruk, who was a democratic socialist, Kalmanovitch was a Zionist and deeply religious.

He was very moral and was often described as “the prophet of the Ghetto.” However, he was just as committed to preserving and maintaining the collection as Kruk. Kalmanovitch was a brilliant polymath with an eidetic memory. Many of his colleagues compared him to a walking encyclopedia saying that they never needed one, when Kalmanovitch was around.

By far, the most interesting Brigade member was Shmerke Kaczerginski. A poet and Socialist, Kaczerginski was known for his upbeat personality and charm with the ladies.

He was also very daring and street smart, traits he learned from his days growing up as an orphan in the Vilna streets. Before the War, Kaczerginski was an active member of the Young Communists. His involvement caused him to go on the run with his wife. His wife separated from him, believing that with her Aryan appearance, she had a better chance of avoiding capture. Kaczerginski returned to Vilna alone.

Kaczerginski encouraged the ghetto residents and the Brigade through his speeches and poetry, which he wrote and recited during their gathering times. He also smuggled items in and out of Vilna through his contacts outside the ghetto.

Another integral Paper Brigade member was Rachela Krinsky, a high school history teacher. An intelligent woman, Krinsky had a Masters in Wilno University and was an expert in Medieval Latin and German works.

Krinsky was also a very passionate woman with an active love life. She had an affair with a married man that resulted in the birth of a daughter. Krinsky’s lover divorced his wife to marry her but was killed shortly after the Germans invaded Vilna.

Krinsky entered the ghetto alone, separated from her daughter who was being raised by her nanny.

Krinsky helped organize and sort the manuscripts that were hidden from the Nazis. She used her expertise in history and Medieval languages to determine manuscripts of historical value. She also became romantically involved with Kaczerginski. Their affair lasted through the War and afterwards.

Besides personalizing the Brigade, Fishman also devotes chapters to some of the most important documents in the collection that the Brigade rescued. They weren’t just preserving objects. The Paper Brigade preserved a history that could have been lost.

One of those materials is the record book of Vilna Gaon’s Synagogue. The record was kept from 1768-1924. Most of the records consisted of administrative details such as monetary and literature donations, property, facility repairs, selections of warden, and sale and bequests of seat.

Of particular importance in the book was the written account of Rabbi Elijah, who died in 1797. The reclusive scholar hosted meetings and had many disciples, but much of his life was shrouded in folklore and hyperbole.

The record book offered a real perspective of the man. It revealed his animosity towards the Hasidic Movement which gained popularity in his lifetime. He thought their desire to find godliness in ordinary objects to be heresy and their ecstatic style of prayer to be for show rather than devout.

Besides a first-person account of Rabbi Elijah, the record also displayed glimpses of how the kloyz (house of prayer) was operated. In the early 20th century, the records revealed that the kloyz supported twenty to thirty full-time scholars, many of which were ordained rabbis, that had a daily discussion of the Talmud at noon.

Another important document that was saved was the diary of Theodor Herzl, the founder of the Zionist movement. The diary was discovered with the other paperwork of his son Hans after the younger Herzl’s suicide in 1930. YIVO leader, Zalmen Rejzen learned of the diary while visiting London, where the diary was located. Rejzen purchased the diary from Hans Herzl’s executor and delivered it to Vilna.

The Viennese Zionists challenged YIVO for the rights to the diary, stating that the diary belonged with Herzl’s other works. YIVO refused, knowing that the prestige of such an important document from an influential figure would bring the organization much-needed prestige. After a year of meetings and threats, the Zionists surrendered the diary and allowed YIVO to keep it.

The diary revealed Herzl’s young years and how assimilation played a large part of his youth. The future Zionist leader considered himself a proud German first and believed that the Jewish people should blend into society so they could not be discriminated against. The book revealed his insecurities, depression that his son inherited, and his former diffident nature to blend in and not make trouble.

While this image betrayed his later portrayal as the proud leader of a Jewish movement, it also revealed the troubles that Herzl was stacked against, how much his fear of his Jewish identity had taken control over his life, and why he later chose a different tactic of separation rather than assimilation.

The Paper Brigade continued to work until the end of WWII in 1945. With the end of Nazism, the members of YIVO began to create a Jewish Museum which housed the treasures that were saved by the Brigade. Unfortunately, the Soviet occupation proved to be just as oppressive as the Nazis, and the Museum was closed in 1949.

This time the Brigade organized a new goal to send most of the materials out of Vilna. Volunteers took the materials trough Lithuania, Poland, and out of Soviet Europe. Much of the material was sent to New York, while some was donated to the National Library of Israel.

The materials that remained in Vilna after the museum’s close were either destroyed or sent to such locations as the Lithuanian Central State Archives, Vilna Gaon’s Jewish State Museum, and the Lithuanian National Library.

After the Soviet Union fell in 1991, YIVO renegotiated with the Lithuanian government to retrieve 100,000 pages of the material. That same year 150,000 documents were discovered hidden inside a church in Antanas Ulpis. In 1954, some confiscated materials were discovered at a bank in Vienna and returned to YIVO.

David E. Fishman’s book showed that the preservation of books, art, and documents is a courageous act. Sometimes it takes just as much courage to save a book as it does to save a life.