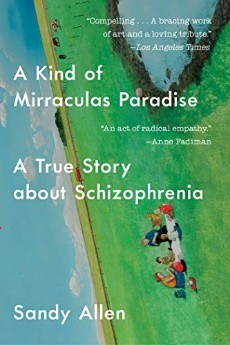 A Kind of Mirraculas Paradise: A True Story about Schizophrenia

Schizophrenia is a complex psychiatric disorder. People who have it may hear voices or see hallucinations, become paranoid, and disconnect themselves from friends, family, and reality. Sometimes those who have it aren’t always able to articulate what they are going through. However, schizophrenia and art are not totally separated and many have written about their experiences with the illness such as Lori Schiller’s The Quiet Room, Mark Vonnegut’s The Eden Express, and Joanne Greenberg’s I Never Promised You A Rose Garden.

One of the most recent memoirs about schizophrenia is A Kind of Mirraculas Paradise by Sandy Allen. Allen’s book is a tribute to her Uncle Bob, a musician who suffered from schizophrenia since he was a teenager. It is a moving book that gets into the mindset of a schizophrenic and also how the disorder affects family members who find it hard to understand someone with such a condition.

The book is told by both Allen and Bob (so much so that one wonders why Bob doesn’t get a co-author byline). The chapters by Bob tell the story of a man trapped by a disease in which he can’t think or write coherently and can’t trust his own mind or recollections. His first few entries are detailed in which he describes his home in Berkeley California with his parents, two sisters (one of whom is Sandra’s mother), family trips to Lake Le Homme Dieu in Minnesota, and childhood crushes with humor and great detail. The one time when he finally got his school crush to notice him was also the day when he had a horrifying buzz cut. His reaction while overly emotional is also hilarious and relatable as anyone who had an embarrassing moment with a potential crush can attest.

Trouble began when Bob’s parents got divorced, and he was raised by his college professor father and his sisters were raised by their free-spirited mother. Bob’s narrative then became murky and disjointed revealing his disconnection from reality and his slide into schizophrenia. Bob did not recall the events that led to the first time he was institutionalized. The way he wrote it seemed like he was minding his own business when his father and father’s girlfriend told him they were going on a trip only to find himself in a psychiatric hospital.

That moment alone explains how important it is to not only have Bob’s story but Allen’s as well. Allen’s chapters provide background information on schizophrenia itself and offer clarity towards Bob’s ramblings. She researched information and interviewed friends and family members to add key information to Bob’s narrative that without would confuse the Reader.

After Bob described his first institutionalization, Allen followed up with a chapter in which she interviewed her grandparents. Her own narrative is somewhat hampered as well by their unwillingness to accept or talk about their son’s diagnosis. (She doesn’t even know the official cause for his first hospitalization.)

Bob’s parents do however reveal that Bob took the divorce really hard and that he had become increasingly withdrawn. When Gene, Bob’s father described an incident during a tennis match, when Bob did not move and just stared in a way that unnerved him, reveals the confusion and helplessness that comes with a loved one’s illness that family members can barely understand.

Despite the difficulties in Bob’s narrative but part of the wonder in the book is that Allen lets Bob speak for himself and only steps into providing background information. Bob’s words are preserved with bad spelling, incomprehensible grammar, minimal punctuation, and racist, misogynistic, and homophobic views. (One time Bob described himself as “THE DUMEST (sic) WHITE KID AT WILLARD JUNIOR HIGH!” And that his classes were “Africa, Africa, Africa, and Slavery, Slavery, Slavery.” ) It doesn’t always make him likable, but Allen set out to give her Readers the real man without correcting or censoring him. This decision helps us understand not only the person he was but emphasizes his troubled outsider status.

That outsider status is cemented by Bob’s breakdowns. Like his institutionalization, no one knew how much of his writing is true (Even Allen is not able to decipher them), and that’s the point. Bob’s writing is very similar to other works about mental illness particularly the Nikolai Gogol short story “A Diary of a Madman.” In this story, a Russian man graphically writes his hallucinations and delusions in a way that appear odd to everyone else around him but makes sense to him. To him everyone else is insane and he is normal.

Bob’s writing is like that. He has grandiose delusions that to him make sense. He read about the Patty Hearst kidnapping and believed that he could predict many of the developments in the case. (Including believing that he visited the home of the Symbionese Liberation Army, Hearst’s kidnappers.)

In one of his hallucinations, Bob thinks that he had a vision of a celestial being and a direct pipeline to God. This like his other hallucinations are written in a way that felt natural to him just not to anyone else.

Unlike many memoirs on mental illness, Bob’s story, unfortunately, does not end with a full recovery or even full understanding of his condition. He got counseling with an understanding therapist, but it was only a reprieve from his demons. Bob’s story ended not with recovery but with him buying a cabin and further isolating himself from his family who just thought of him as “strange” and better left unseen and unheard. Instead of getting acceptance from his family he became a stranger, a cipher to them. Allen herself had very few memories of meeting her uncle. She saw him as a nice but vague guitar playing oddball who called everyone “man” and filled her with unease.

Allen was repeatedly told by family that Bob had problems, but since her family never mentioned schizophrenia, she was unaware of how severe his problems were until he sent her his memoirs. Allen’s narration describes someone who tried to not only understand a mentally ill relative but the wall of silence around him. She tried to understand why his parents and sisters kept themselves away from him by sending Bob to hospitals and refusing to acknowledge his symptoms. They couldn’t even tell their granddaughter any details of his symptoms considering it part of the past.

While Bob never had a recovery or resolution to the story up to his death in 2013, the resolution belongs not to him but to his niece, Sandra. As she puts together the book, she accepts not only her uncle and illness but understands his family’s hurt and bewilderment towards it. As she edited her uncle’s memoirs she learned not only about the mental illness but the man who had them giving the understanding that eluded him in life.