Who Are My Ancestors? History, Identity, Art. Book Review 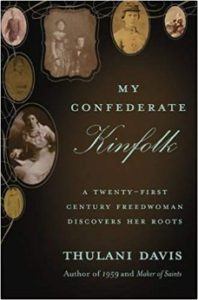 My Confederate Kinfolk: A Twenty-First Century Freedwoman Discovers Her Roots

We all have connections to our family histories that even a DNA test can’t decipher. We may have a family story about how our ancestors emigrated to their new country. A talent or a physical mannerism seems to pop up now and again in subsequent generations. Eyewitness accounts to history in which our ancestors were involved. All of these things make the ties that go into families.

This concept is shown in Thulani Davis’s fascinating biography My Confederate Kinfolk: A Twenty-First Century Freedwoman Discovers Her Roots. In January 2001, she started taking notes for what was originally going to be a novel, but she became more interested in her family’s story. The general human interest expressed by the question ‘who are my ancestors?’ got in her writing an artistic feature. Davis’s research caused her to ask plenty of questions that went unanswered either because the people she asked didn’t know or didn’t want to talk about it.

Why were some of her ancestors unnamed? Why did some family members have little contact with others? Above all, why did one photograph show her grandmother, a black woman, dressed in a tartan when she was a child?

Some of Davis’s family was known through family oral histories, but others were not so well known until she researched it. Davis, for example, was aware that her grandmother’s family was mixed race as so many people were back then, but not about the relationship between her great-grandparents. (Her research showed plenty of master-slave relationships that resulted in the birth of mixed race children. Of course, there are more famous examples such as Thomas Jefferson and Sally Hemmings.)

Her research showed that her great-grandparents were Chloe Tarrant Curry, an African-American woman whose parents were slaves and Will Campbell, a white Scottish-American man whose father was one of the founders of Springfield, Missouri.

Chloe and Will met in 1875 in a small Mississippi town called Silver Creek.

In a true account of how family oral history can be altered, Davis could not find any official records of their first meeting or what were their emotional feelings towards each other. Some of the more romantic members of the family preferred to portray them as a star-crossed couple flying in the face of convention. More realistic members thought of them as rebellious in some ways but still adhering to the standards, such as never marrying because laws would have forbidden it.

The truth that Davis found lies somewhere in the middle. Her writing captures both Chloe and Will as people of their time in many respects but also shows them as people who challenged conventions in their own way and passed that nature to the later generations including their great-granddaughter.

While the Civil War had come to an end, ten years prior before Chloe and Will met, there were still plenty of race-related issues. Many white Southerners objected to Reconstruction-era policies and some objected to having to work alongside and treat as equal people that they once owned.

Will and Chloe’s relationship while not unheard-of even in the 19th century was very different from many interracial relationships at the time. Many interracial relationships usually stemmed from one night stands or the occasional forbidden affair in which an African American, often a slave, was used for pleasure but then shoved to the side by the wealthier white family or their lover once that pleasure was satisfied. The fruit of their union was not always acknowledged for many years, decades, even centuries afterward. Davis reveals that the story was so common that she ran into many African American families that boasted that they had a Civil War general in their family tree.

What made Chloe Tarrant Curry and Will Campbell’s relationship stand out was the closeness and longevity of it.

While interracial marriage was illegal until the 1960’s, Chloe and Will managed to live together as a common law husband and wife and had a daughter. For the time period, they were pretty groundbreaking. Davis’s writing showed that far from being a secret tucked away, Will acknowledged both his common-law wife and his daughter, Georgia. He left them his property in his will which Chloe managed until well into her eighties.

He accepted them in the face of his disapproving relatives and siblings and even cut ties with some of them, and under the circumstances, they seemed to be a loving couple.

However, while the Tarrant-Campbell union was pretty fair for its day, Davis said that there were still issues that kept them from being seen as equals in the eyes of society. Some of them came from within themselves.

While Will would be considered forward thinking and liberal in the 19th century, he was still a man of his time, and Davis doesn’t shy away from revealing that. He accepted Georgia but did not extend any offers towards Chloe’s four children from her previous marriage to James Curry. He raised his daughter as a white girl, even refusing to let her befriend other black children, which was quite hypocritical because he grew up alongside black children and was closer to some of them emotionally than some family members. Some of Davis’s relatives said that Georgia was made to forget that she was “half white” so she was almost never considered as “half black.”

Chloe was also a pretty groundbreaking person in her day. Besides her relationship with Will as well as her ability at managing his property after his death, she was pretty interesting in her first marriage. Even though she married James Curry and had four children, they got divorced (a very unusual step for a couple in the 19th century particularly an African American one.) They were separated by the time, Chloe and Will met. In fact, Davis cited that she was still married to Curry as another factor that Chloe and Will could not marry themselves.

During her research, Davis studied not only her great-grandparents but the rest of their families, offering much-needed answers to the questions that her family may have had. For example, Georgia did not know the names of Chloe’s parents and mistakenly believed that she was one of six children. However, the research that Davis conducted for the book revealed that there were seven children and that census records revealed her parent’s names as Caroline and Edmond Tarrant. (Davis believes that because there was plenty of documentation within her family particularly Chloe’s photo album and oral family history, then she attributed the lack of Chloe’s parents’ names to inexcusable negligence.)

Davis didn’t just do research through records and secondary sources for her book. She asked family members. She discovered patterns that she never thought about before. For example that many of her relatives including her mother sewed clothes, made quilts, and participated in other craft projects made more sense when she learned that those talents ran in her family. These were traits that were handed down from a world of slavery and segregation which reminded people that they often had to do without.

An interesting eery coincidence was an earlier connection that Davis had to the name Tarrant. Her first novel, 1959, featured a protagonist whose name was Tarrant. She had no previous knowledge of her great-grandmother’s family name when she wrote it. She liked the name and based it on a real person who she later learned may have been a distant relation.

Davis also captures Will Campbell’s family as well and through them answers some pretty tough questions about accepting that half of her family line were staunch Confederates during the Civil War and who later took part in policies that would have destroyed the other half of her family.

This is particularly noticeable in how she writes Will’s family particularly his sister, Sarah Rush Campbell Owen and his brother, Leonidas Adolphus Campbell.

Sarah was a prim woman who lived what would be considered a correct proper existence for her time. Many of her letters suggest the typical upper-class values and dependence on men that a late 19th-century white woman would have.

However, Davis found that Sarah was also an author and had written chapbooks of poetry and fiction. Her fiction was possibly a reflection of her real feelings since they focused on a young woman forced into an arranged marriage, and her unhappiness because of her husband’s temper and her ambivalent feelings towards motherhood.

Davis also learns that Sarah is one of three writers (four counting Davis herself) in her family revealing another talent that was passed through the generations.

Davis is also unflinching in describing the Campbell family’s racism particularly towards Chloe and her family. When Sarah learned that Chloe inherited Will’s estate, she contested her brother’s will. This was one of several times that Sarah or her husband Jabez Owens’ family took someone to court in the book. Apparently, they were a litigious bunch.

The more racist attitudes were to be found within Will’s brother, Leonidas. Besides being a part of the Confederate army, Leonidas was a key player against the Reconstruction policies after the Civil War. A lynching occurred outside his home. While there was some debate how involved he was, Leonidas did summon a posse against the man, James G. Patterson, and he certainly knew about it.

Also, as a Democratic member of the State Legislature, Leonidas was involved in such dealings as voter suppression and other corrupt means against the Republican Party so his party could get votes. Davis is clearly reluctant to acknowledge Leonidas as family and is appalled by his actions, but she also accepts that to realistically capture her family then she has to portray all sides. She has to accept all the parts that made her.

My Confederate Kinfolk is a brilliant work that covers what we learn when we study our family history. Thulani Davis captured the many aspects of her family past particularly through Chloe Tarrant Curry and Will Campbell’s relationship to show the legacy they left behind and the woman that she has become.