When a person wants to study the Bible, one way to do this is by studying the languages of the Bible. One of the styles that were used in writing the Bible was Biblical Aramaic. If you want to know how to learn Aramaic we will show you how you can do this in this article.

History of the Aramaic Language

Aramaic, which is also known as Syrian, is a Northwest Semitic language, (other languages in this group are the Canaanite languages of Phoenician and Hebrew). In antiquity, Aramaic was the language of the Aramean people, who were a tribal confederation that lived in what was known as Aram (modern-day Syria).

Before the Aramean people were dominated by the Neo-Assyrian Empire in the 9th century BCE, the Aramean people had kingdoms across the Near East; which is modern-day south-central Turkey, northwest Arabian Peninsula, the Palestinian Territories, Israel, Syria, Lebanon, and Jordan.

Not only was Aramaic a spoken language, but it was also a written language. The Aramaic alphabet originated in the Phoenician alphabet; however, over time, Aramaic developed its peculiar square style. Quite a few other alphabets are based on the Aramaic alphabet, such as Hebrew, Turoyo, Nabataean, and Palmyrene.

Some distinguishing features of the Aramaic alphabet and writing system are: the alphabet is a constant alphabet, sentences are written and read right to the left, in horizontal columns, verbs are based on triconsonantal, nouns have construct and absolute states, and sometimes different letter combinations create the same sounds.

One should also note that Aramaic was not just one language but had numerous dialects, depending on were the speaker was from. This was because the Aramean lands had been conquered over and over again; first by the Neo-Assyrian Empire, then the Neo-Babylonian Empire, followed by the Medes Empire and the Achaemenid Empire.

The Neo-Assyrian Emperor King Darius the Great adopted Aramaic to be its official language for the western half of his empire. Before Aramaic stopped being the common language, it was the universal language of Egypt, Caucasus, Anatolia, the Arabian Peninsula and the majority of Western Asia. When the Rashidun Caliphate took control of the Achaemenid Empire around the 7th century, Arabic started to replace Aramaic as the common language of the Middle East.

Aramaic is still spoken to this day. Some groups that still speak Aramaic are the Assyrians of Iraq and people in southern Russia, southeastern Turkey, northeast Syria, northwest Iran, Azerbaijan, Armenia, and Georgia. Since there is a chance for Aramaic to become a dead language it is vital for people to study and learn Aramaic before it is lost forever. Taking online classes is a great opportunity to learn Aramaic. 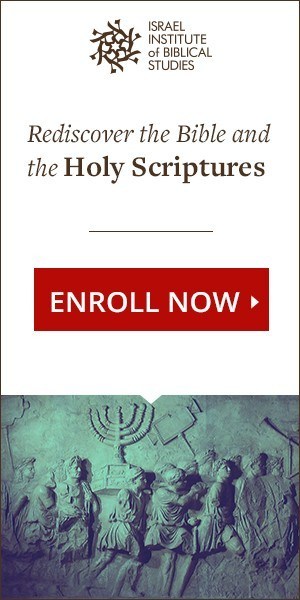 How to Learn Aramaic: Find the Solution!

The Israel Institute of Biblical Studies is a recognized partner of the Hebrew University of Jerusalem, which is an accredited university specializing among others in biblical research and theological studies. The programs of the Israel Institute of Biblical Studies that are offered are developed by scholars and educational professionals that are experts in their own field of study. Students from around the world can meet teachers that are in Jerusalem, and learn about customs and everyday life from them; they are also able to connect with other students who are from around the world.

One of the benefits of learning Aramaic online by taking the courses of the Israel Institute of Biblical Studies and the Hebrew University of Jerusalem, that accredits these courses, is that the student can learn in their own time, in their language, and from anywhere they have access to the internet. When the student is taking Aramaic classes, they will use live video lessons and webinars; along, with having peer support and discussions.

While learning Aramaic online, the students will find themselves in small class sizes. The small sizes allow the teachers to take time to focus on each student and help the student to reach their full potential. The assignments are minimal and involve two hours a week. Also, after completion of the course, the student will receive a certificate attesting his level of knowledge from the Israel Institute of Biblical Studies.

The Aramaic language class takes nine months to complete and was developed by Dr. Ohad Cohen. Before starting his career as a faculty member at the Hebrew University of Jerusalem, Dr. Cohen was a researcher in linguistics. He received his Ph. D from the same university and went on to do post-doctoral research at the Harvard University on the philology of the Bible. Dr. Cohen has also received various awards, grants and prizes.

What You Will Learn

The course is a nine-month program and will begin with an Introduction of Aramaic. The introduction will give the background of the Aramaic language, such as: were did it come from and who were the first speakers of Aramaic, how does Aramaic relate to Hebrew, and wherein the Bible is Aramaic found.

The second week of the course will be about nouns and adjectives. The student will start with the most fundamental parts of the Aramaic language, the nouns and adjectives and how they correlate and work with each other. Examples will be used from the Bible texts of Daniel and Ezra; so the student can practice what they are learning.

The next week, students will work on the definite article and how the Aramaic word for “the” interacts with gender suffixes, and the nouns and adjectives that were learned in week two. Also, during week three, the student will learn how archaeology is helping to explain the actual historical events that take place in and during the time of the Bible.

Week four will find the student learning about construct chains. Unlike the English language, the Aramaic language does not use the word “of,” so to describe nouns with other nouns and not adjectives, Aramaic writers use “construct chains.” The student will also learn the effects the construct chains have on the noun.

During week five of the course, the students will read the famous Aramaic story of “Daniel in the Lion’s Den,” and discuss the literary and linguistic characteristics of it.

During week six and seven, students will learn about independent personal pronouns and pronominal suffixes. Students will begin to learn how to form sentences.

During week eight, students will read “The Fiery Furnace,” to review the forms of pronouns they have been working on. 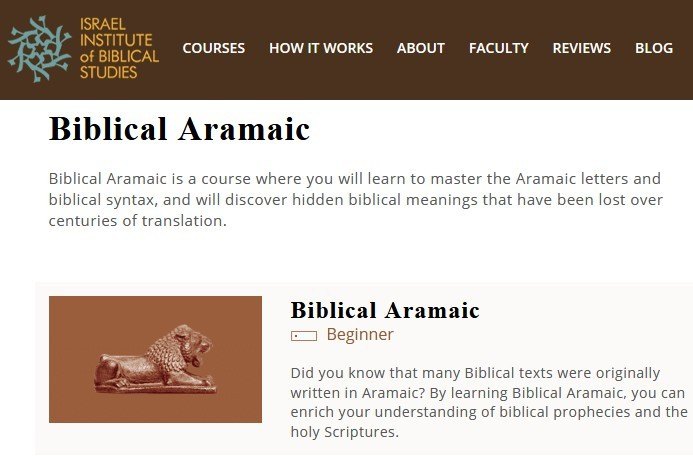 In week nine, students will be working on particles and how they were utilized to build a construct chain. Students will also learn how to build legitimate sentences by renouncing verbs.

During week twelve, students will work on the Book of Ezra and the letters contained in it, which the King of Persia exchanged with the administrators of his kingdom.

Week thirteen will find the students again working on verbs; this time, the students will be studying the participles and how they are different from the other verbs they have previously learned about.

Week fourteen finds the students learning about imperative and infinitive verbs; while week fifteen is a verb review.

In week sixteen students will begin to study the Aramaic verb patterns also known as Binyamin, their function in the language, and how they relate to the Hebrew Binyamin.

During week seventeen, students will continue learning about the Binyamin and also the so-called Hitpeel Binyan.

Week eighteen students will read “The Writing on the Wall” from the book of Daniel and discuss the historical content that explains the characters and events that take place during it.

In week nineteen, students will begin working on the double Binyanim, and also on Pael, and Hitpaal, and then in week twenty, students will work on Hafel and Hofal verbs.

In week twenty-five, students will read the part of the book of Ezra in which King Darius talks about his intention to rebuild the temple of Jerusalem. Weeks twenty-six and twenty-seven will find students working on consonant shifts.

Finally, in week thirty, the students will review and get a chance to look back over the past thirty weeks and see just how far they have come from week one.

Have Access to An Ancient Language in Modern Times

By taking this online Aramaic course at the Israel Institute of Biblical Studies, the student will familiarize themselves with the ancient wisdom and acquire a better understanding of the Bible. They also have the potential to save the Aramaic language from becoming a dead language.