If you live far from Israel, you might not be so aware of Modern Hebrew, but Israeli language and culture is actually quite relevant: Israel has both an exciting modern society and a progressing economy; furthermore, Israel is dealing with a lot of the same problems we all face, such as climate change and immigration issues. With genuine motivation, but relatively little time or expense, online Modern Hebrew lessons can make you fully fluent.

You might question whether Modern Hebrew is worth learning. It is not a staple language offering at Western academic institutions. It is not spoken by a large and spreading population, as are Chinese and Spanish. However, Modern Hebrew might open doors you did not know were there.

The modern language bears similarity to ancient Biblical Hebrew, and so many of the skills are transferable. This is something to keep in mind if you are a biblical scholar; furthermore, fluency in Modern Hebrew will help you navigate a trip to Israel (including Old Jerusalem).

The Rosen School of Hebrew is arguably the best Modern Hebrew online learning site. The site also offers courses in Biblical Hebrew and Yiddish; however, you will find that these link to the Israel Institute of Biblical Studies. Both of these online learning sites are accredited by the Hebrew University of Jerusalem, so you can get credit from the Hebrew University for successfully completing any of either sites’ courses.

The Rosen School offers an excellent format, experienced teachers, and effective teaching methods. Student reviews indicate that almost everyone loves the online learning platform: It makes it easy to check progress, do homework, and engage with the instructor and classmates. There is both online flexibility and classroom experience—you can watch a recorded class or you can watch at the scheduled time and be there live your classmates and instructor.

Student reviews also repeatedly include high praise for the instructors. The instructors all have extensive resumes of language instruction; many have written teaching materials, taught in different countries, and have worked with multiple languages and cultures. Furthermore, these instructors contribute to the Hebrew immersion experience—most are native speakers and they are teaching from Israel. Students universally report feeling supported and encouraged to communicate during class and extra study sessions.

On a similar note, students love the interactive community that each course provides. The Rosen School boasts a “Hebrew-in-Hebrew” approach; you do not just translate and learn vocabulary. Also, the courses quickly engage students in reading material, poems, and even songs. Students feel safe expressing themselves in Hebrew as they are able.

The teaching approach originated with Aharon Rosen, who was himself an immigrant to Northern Israel from Hungary. He knew the struggles of being an adult trying to learn a new language and culture, while also fulfilling adult responsibilities (such as finding employment). Initially, his teaching methods were directed at the mostly German immigrants to Israel in the first half of the 20thcentury. Later, his approaches became standard for all immigrant language programs and a guide to all adult Hebrew learning programs.

Most of the Rosen School’s courses are for motivated adult students, but it does offer one course, Hebrew for Kids, which provides the same interactive online learning in a format designed for children.

The Rosen School’s beginner-level course takes 9 months to complete, with about 2 hours of work per week. The course is worth 2 Hebrew University credits. As you would expect, the course covers the Hebrew alphabet and introduces the student to many new words, 400 in total. There is an introductory study of syntax, including present tense verbs, prepositions, and pronouns. Oral and listening skills are built alongside basic reading skills.

More specifically: Words have gender in Hebrew, and the student must learn how to determine a word’s gender and how to use inflections (changes to words) to indicate gender. People who have taken French or Latin will find this a familiar challenge. However, Hebrew includes even more noun inflections and usages. By the end of this series of Modern Hebrew lessons, you will be able to conjugate (make proper changes to indicate tense, number, gender, mood, case, etc.) common verbs and use their infinitives.

For most Western students, there is the challenge of learning to write in an entirely new alphabet. The student has to learn how to write the Hebrew symbols and to add diacritical marks, which are added to a symbol to indicate a vowel or a different pronunciation.

While this might sound rather tedious, the course quickly gets the student involved in real life conversational situations. You will learn how to politely greet someone and introduce yourself in Hebrew. You will be able to talk about phone numbers, days of the week, and people’s ages. 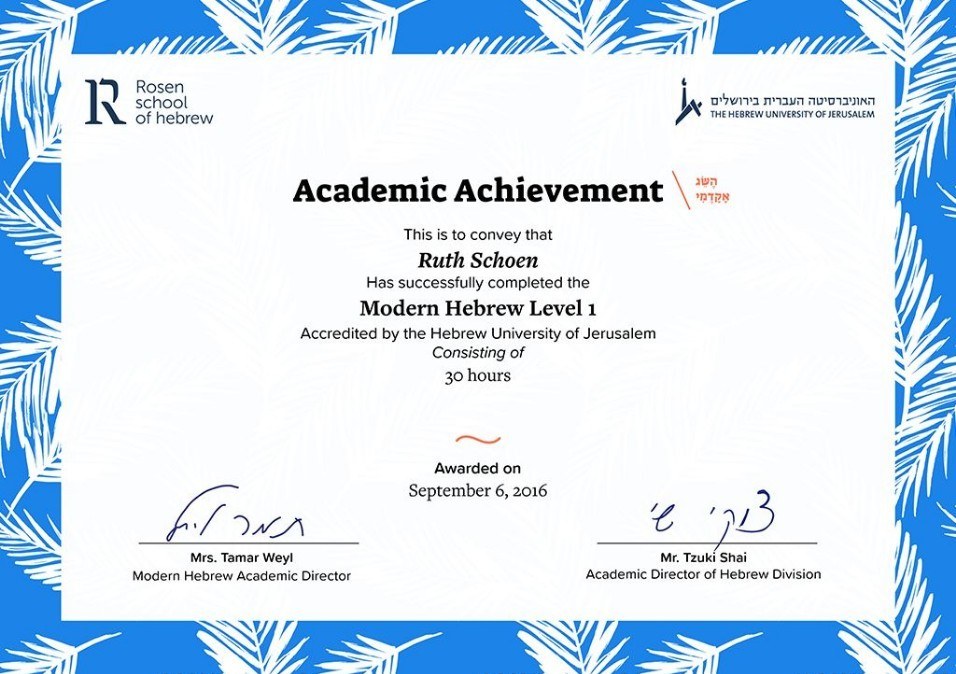 The Rosen School’s 2nd course—an “improved”-level course—takes a similar amount of time and earns the same University credit. With a total of 350 new words learned, this course allows the student to run basic errands in Israel, with use of more complex sentence structures, question words, time-related adverbs, and more present tense verbs and infinitives.

This course applies Hebrew to many practical situations: You will describe symptoms to a doctor, discuss jobs, understand words concerning public transportation, order breakfast at a coffee shop, and take a trip to the shuk (marketplace). Foodies will enjoy the emphasis on recipes and ingredients in this course. Biblical scholars will appreciate the virtual tour of Old Jerusalem, with emphasis on the Kotel, or Western/Wailing Wall.

Rosen’s first intermediate-level course introduces much more syntax: direct vs. indirect speech (quoting directly vs. reporting content); conditional expressions; expressions of cause and effect; and introduction to the past tense. The student is able to read and discuss texts about Israeli cultural issues; there is even some use of Israeli slang.

The student learns proper inflections for a number of prepositions (a new challenge for many Westerners); also, several Hebrew verb groups are explored—Pa’al-stem verbs of the Ayin-Vav and Lamed-yod types, as well as Pi’el, Hif’il, and Hitpa’el-stem group verbs. There are also new noun constructs and expressions of possession.

The student practices reporting a daily schedule and reads short accounts of scenarios; these skills are applied to the realistic scenario of seeking help from an Israeli psychologist for one’s child.

The second intermediate-level course progresses with syntax concepts already introduced; plus, it introduces the future tense. Now, the student can read Hebrew poetry and conduct simple debates and discussions in Hebrew.

So much new grammar happens in this course: The student learns about attributive clauses (clauses that describe a noun) and their use with a particular conjunction; more preposition inflections; gerunds (verb forms used as nouns); and more about the conditional mood. In addition to these, more Hebrew verb types are introduced: Binyan Pa’al, gizrat Ha’shlemim in the present, past, and future tenses; the Ef’ol form; gizrat Pe-Yod, Pe-Alef Binyan Pa’al, Pe-Nun, Ayin-Vav, and Lamed-Yod. The course also introduces the 7 binyanim (roots) of verbs.

While this might sound overwhelming, the course introduces these forms gradually with lots of practical application. In fact, the student starts by reading text by Eliezer Ben-Yehuda, a lexicographer and editor who contributed greatly to the use of Hebrew in the modern age. The course features a number of songs about a variety of human experiences. The student also gets a taste of café conversation and business talk. 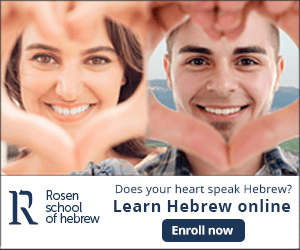 This advanced vocabulary and grammar is applied to Hebrew literature (proverbs, poems, essays) and academic documents—as well as more songs—with plenty of opportunity to discuss these with instructor and classmates. The student takes a virtual trip to Avshalom Cave—famous for its copious stalactites. One lesson focuses on grammar issues of polite email and text—quite possibly the most practical writing skill one can have right now.

The 6th Rosen School course is truly an advanced course—upon completion, the student has the reading skills of a native speaker. As such, the course involves discussions of popular literature, newspaper and journal articles, along with more essays and songs. During the course, the student learns exceptions to normal Hebrew syntax rules and learns to create very complex sentences—both of which contribute to fluency in Modern Hebrew. Students at this level can write reactions to what they have read or heard; they can even create self-expressive writings in Hebrew.

It is hard to believe there could be more grammar, but there is. This course covers adjectives when used with certain prepositions; more verb roots; abstract nouns (nouns that describe an idea or quality, rather than a tangible object); and more particular instances of inflection.

The next to last course is for advanced students who are motivated to become experts in Modern Hebrew. In this course, you enjoy reinforcing your built-up reading, writing, and speaking skills. This course is not by any means just about language—while the Rosen School’s lessons always have plenty of applications, lessons on this level are even more dedicated to discussion of academic topics other than language. At this point, the student can easily read newspaper articles on education, digital communication, and environmental sustainability—and then instantly express his/her own thoughts in speech or writing.

There are such topics as global warming and its effects on Israel, the rise of homeschooling in Israel and the approaches homeschooling parents use to teach their children, ways to help immigrants (called olim in Hebrew) learn the language and gain employment, the role of bilingual schools (usually Hebrew and Arabic in Israel), volunteering opportunities and helping society, and the growing popularity of using the natural environment as a form of psychological therapy.

This course has a couple lessons involving kibbutzim, which are agricultural communes in Israel; traditionally, they have been a prominent fixture of the country’s economy, but they are losing dominance to the growing urban economy and Israel’s growing tech/finance areas.

Also, a few lessons discuss Jewish holidays, such as Passover (Pesach), Shevat, and Purim—relevant to those interested in Biblical Hebrew and Modern Hebrew, alike.

The final, expert-level course gives the student such advanced practical skills as searching the Internet and using websites in Modern Hebrew. This is best described as a capstone course—it reinforces and applies the accumulated skills. There is considerable review of syntactical and grammar aspects, while navigating discussions of Israeli politics and current events.

Modern Hebrew is a highly inflected language. This means that words are changed more than they are in, say, English, a lightly inflected language. For example, English speakers would not normally think that prepositions (on, toward, before, etc.) need to be changed, regardless of the word that follows or where they are in the sentence. However, in Hebrew, prepositions are inflected; this is why so many lessons concerning the preposition inflection are distributed throughout the course material.

Obviously, another challenge is learning the Modern Hebrew alphabet, which involves symbols and marks, rather than the Latin letters of the Western alphabet. The good news is that the skill is transferable to Biblical Hebrew, which is very similar to Modern.

Modern Hebrew: A Language Worth Learning

Hebrew has a reputation as a sacred, ancient, and academic language. However, Modern Hebrew is very much a living language—used in a nation that is a beautiful blend of tradition and modernity. Israel struggles with many of the same challenges that many other countries do, and so understanding Israel’s approaches and innovations is potentially worthwhile to anyone in the world.