Bible in the Original Hebrew: Learn the Bible from the Source

There are many reasons to learn the Ancient Hebrew language. If you are a follower of Judeo-Christian religion, you will better comprehend the Bible by reading it in the original language it was written. The Bible in the original Hebrew reads differently than translations, and you may learn things you didn’t know before! Those interested in history can also gain a richer understanding of the periods of time the Bible was written in by being able to reach Ancient Hebrew, not just to read the Bible but to read other texts written in the same time periods.

One way you can learn Ancient Hebrew is through the Israel Institute of Biblical Studies. Having an academic partnership with the Hebrew University of Jerusalem, their goal is to make the Bible and Ancient Hebrew accessible to everyone all over the world. Learning Ancient Hebrew from them is a great idea because they are one of the top biblical researchers worldwide, so you know you’re always getting the best education possible.

They have been teaching Ancient Hebrew, as well as Modern Hebrew, Aramaic, Biblical Greek, and Yiddish, for years. All of their classes are available online, and you will learn from professors located in Israel. The best thing about learning online from the Israel Institute of Biblical Studies is that all the courses are fully accredited by the Hebrew University of Jerusalem. You can learn valuable knowledge, on your own time, while gaining real college credit you can use toward a degree program back home.

Another goal of this institute is to offer as much interaction between students and their professors as possible. When you take a class, you aren’t just watching prerecorded videos from a professor. The classes are live, and you have the opportunity to ask questions as needed. You also gain access to a whole community of other learners you can interact with and practice your new language skills with.

The Hebrew language is a Semitic language that is related to languages such as Aramaic, Phoenician, and Akkadian. It was a flourishing language in the Ancient Kingdoms of Israel from around 1200 to about 586 B.C.E. The countries where it was spoken include the modern countries of Palestine as well as Israel.

Around the 3rd century B.C.E., Aramaic became a more common language than Hebrew. From that point on, the Hebrew language continued to be spoken, but as time went on, more and more loan words entered the language. It steadily declined until it became basically extinct as a spoken language. It lived only through the Hebrew Bible and the Jewish study of the texts until it was revived as a modern language during the 19th century. Modern Hebrew is a fascinating language because of this fact, as it is essentially the only example of an extinct ancient language being revived. Modern Hebrew is also the only example of a modern language that is based entirely on a written language.

The Hebrew Bible is also known as the Tanakh or the Mikra. Every book, with the exception of the Book of Daniel and the Book of Ezra, was originally written in Ancient Hebrew. It contains 24 books in total, which are divided into three sections: the Torah (The Teachings or Five Books of Moses), the Nevi’im (The Prophets), and the Ketuvim (The Writings).

The Hebrew Bible is highly important to the Hebrew language because the majority of our examples of Ancient Hebrew are found within the original Biblical texts. In fact, some of the oldest known examples of Hebrew are found within the Hebrew Bible. The Song of Deborah from the Book of Judges is one example of the oldest form of Hebrew we have been able to find to date.

The Hebrew Bible is not just important to those who practice Judaism or to speakers of Hebrew. The books of the Hebrew Bible also make up the Old Testament of the Christian Bible. This makes Ancient Hebrew itself a language that is important not just to Jews but to Christians as well.

There are many professors who teach the Biblical Hebrew courses for the Israel Institute of Biblical Studies. No matter who is teaching your particular course, you are sure to get an education from someone who really knows their stuff. Here are a few of the professors you might meet during your studies! 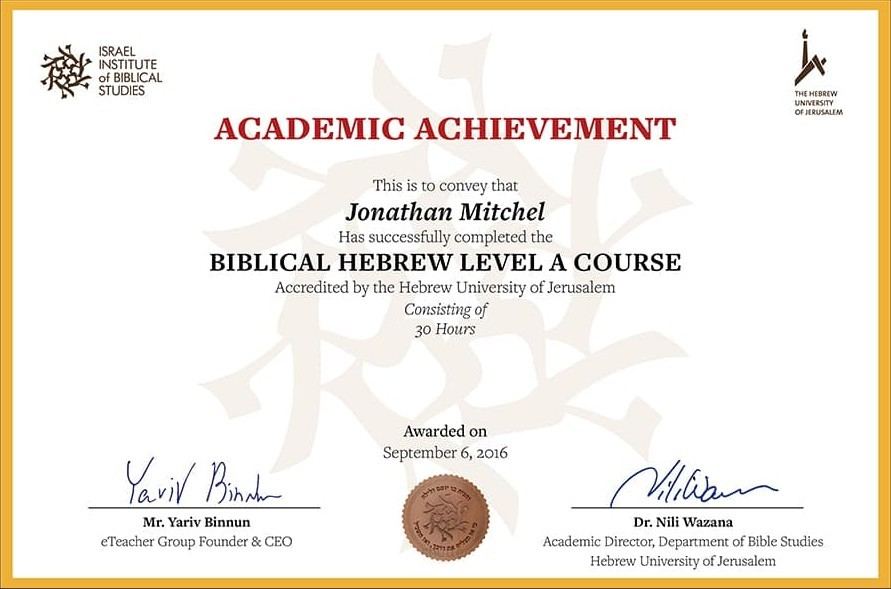 Dr. Ohad Cohen is one of the professors. He was a researcher in linguistics at the Hebrew University of Jerusalem, teaching now at the University of Haifa. In addition to Biblical Hebrew, he also teaches Biblical Aramaic and Hebrew Phonetics.

André Felipe Cunha Vieira practices Judaism and is passionate about both researching and teaching the Hebrew language. He is currently doing research in Spain as part of his Ph.D. in Linguistics, in addition to teaching Biblical Hebrew.

Annie Caruso teaches Biblical Hebrew in private and group classes. She also helps train new Hebrew teachers, as well as English teachers. In addition to her work for the Israel Institute of Biblical Studies, she teaches courses in archaeology and Hebrew at the University of Oregon.

Beth Broadway has been working for this institute for many years. In addition to the Biblical Hebrew courses, she also teaches Modern Hebrew at all levels. She works in local synagogues and teaches classes about Jewish drama and Israel culture as well.

Carlos Santos Carretero teaches Biblical Hebrew as well as the courses “Discovering the Hebrew Bible” and “Jewish Background of the New Testament”. He has done a lot of research at universities in Spain related to the relation between mysticism and Jewish literature.

Study the Bible in the Original Hebrew: Beginner Through Intermediate Levels

There are five different levels of classes you can take in Biblical/Ancient Hebrew through the Israel Institute of Biblical Studies.

The first is the Beginner course, also known as Level A. This is an introduction to the Biblical language. You need absolutely no knowledge of Hebrew or of the Bible to take this course. The syllabus includes 30 different sections that you will go through over the course of nine months. 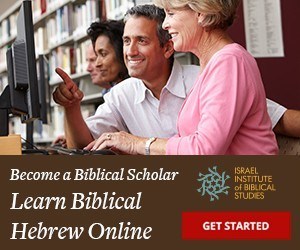 What you will learn first will be the Hebrew alphabet. You will go over its relation to the Latin alphabet in addition to learning all 23 letters. As a separate lesson outside of the Hebrew alphabet, you will learn the Hebrew vowels and how they differ from vowels in the Latin alphabet. From there, you’ll be able to learn all about syllable division and then go on to learning basic nouns, adjectives, articles, prepositions, and personal pronouns.

As you go through this course, you will use Biblical stories such as the story of Ruth in order to check in about your knowledge and put it to the test through reading and translating sections of Hebrew text.

The next course is the Improved course, also known as Level B. The course begins with a look at the Book of Jonah in order to review what you learned in Level A. After that, you will go over participles, imperatives, and the infinitive. You will take a look at the Birth of Moses and the story of Joseph in order to gain some cultural knowledge and look at how the Hebrew language is used in these stories. As you go through the course, you will have many lessons on different verb forms, such as the Hufal verb and the Hitpael verb. Numbers, relative clauses, and suffixes are also things you’ll learn. In the end, you’ll read some verses about Jacob in order to test your skills.

Level C, the Intermediate course, is up next. Your review of the material you’ve learned so far will be reading from the Book of Samuel. “Weak verbs” will be your first grammar lesson after this. You will also learn how to use different Hebrew lexicons in order to look up any words you don’t understand. Biblical stories looked at in this course include the story of David and Goliath and other stories featuring David. A variety of new verb forms will be explained in this course, as well as accents and accusations, the volitive system, and weak noun patterns. The course wraps up with a few psalms to go over what you’ve learned so far.

Once you move on to Level D, the Advanced course, you will really start to look at larger sections of the Bible. You will also move beyond simply learning grammar and delve into looking at literary elements of the language as well as poetry. The course begins by looking at the stories of Elijah. After a lesson in Biblical poetry, you will look at the literary phenomenon of parallelism. You will look at the first Psalm in order to master both of these concepts.

Sound pairs, alliteration, and poem syntax will be looked at next and you’ll get to read the Song of Songs, one of the more well-known Biblical poems. Following this, you’ll look at the “language of the law”. This is a different style of writing than that found in poetry and you’ll look at different elements included in writing about the law.

This course will also teach you about different Hebrew grammar books and how to use them so that you can continue studying grammar on your own or just use them for some review. Following that, you’ll learn about the language used in Biblical prophecies. In the end sessions of the course, you will look at Ecclesiastes. This is a unique book and you will decipher what makes its language different from other books in the Bible.

The final course is Level E, the Expert course. This course is less focused on grammar and instead has a large focus on the history of the Hebrew Bible and how it changed throughout the years. You’ll start by looking at consonant shifts in the Hebrew language.

Next, you’ll look at Archaic Biblical poetry to get an idea of earlier Hebrew. The Song of the Sea and the Song of Deborah will be looked at. The course will go over the First and Second Temple Periods, and different verb forms and vocabulary found within these periods. Next up is Late Biblical Hebrew.

There are also a series of lessons on the Dead Sea Scrolls, their importance, and the language contained within them. In a final lesson, you’ll review all the different periods of time you’ve looked at and talk about what characteristics each stage has.

What Others Think of Their Hebrew Courses

Look at any of the reviews from current and former students of the Biblical Hebrew courses, and you will see an overwhelmingly satisfied group of people. Based on the feedback, the courses are fun and interesting in addition to being educational. Students enjoy the multicultural environment and the ability to speak with and practice with people all over the world. All of the students have found they learned something from their courses, while also having a good time!

When it comes to the professors, the reviews are positive as well. Students praise their professors for their professionalism, sense of humor, and their high level of knowledge of Ancient Hebrew.

Whether you are a religious person, a historian, or just someone who is interested in the Hebrew language, learning Ancient Hebrew can be a great way to add a new skill to your repertoire. If you want to learn online in an interactive environment that offers the best education possible, try the Israel Institute of Biblical Studies. Reading the Bible in the Original Hebrew may show you things you never knew about the ancient world and about the Judeo-Christian religions.