What Is the Meaning of the Life We Live Today?

People have always tried to discover the meaning of life. They have assumed that there is a sort of given sense, like a hidden thing that they could find if they would search long enough. This idea was a consequence of their religious view: because they believed that the gods created the world, and they imagined these gods as being powerful entities, they also considered that these wise beings would have created humans with a specific intent. They could not have imagined that beings whom they represented as being perfect, but similar to human beings, could do something without any intention. However, because they were far superior to humans, the latter could not understand their decision easily. One thought that only if the gods revealed their plans to the man, the question of what is the meaning of the life he lives could receive a real answer.

However, this theological anthropomorphism has already been criticized in Antiquity. For example, the Greek philosopher Xenophanes wrote that if horses had gods, then their gods would look like horses; also that the gods of Ethiopians are black like them. Therefore, a more enlightened religious idea concerning the meaning of human life was to conceive of it as part of nature: humans belonged to nature, and thus their life had to exhibit features that were similar to the characteristics of natural things. One of the most evident natural features was for them organic development: plants and animals, as well as humans, develop from an embryo stage to the complete developed organism.

Accordingly, the human mind goes through a series of stages that are tied together as in organic development. As we know from our own experience, children cannot understand things that adults can, because they have neither the capability nor the required experience and knowledge. However, growing up, they know more and more things, until they are wholly mature to comprehend all that adults think and do. The human spirit was also represented as a seed that develops from the initial almost unconscious stage to its full self-understanding.

Later, it was not only the individual mind that was conceived according to this organic scheme, but also whole societies and cultures. The German philosopher, Oswald Spengler in his famous book The Decline of the West, described the major civilizations, both of the past and of the present, as monads, that is to say as spiritual worlds that are closed in on themselves, as Leibniz conceived of them in his Monadology.  These spiritual worlds were born, developed and then declined and disappeared similarly to organisms.

We can find in Eastern culture the idea that human life develops according to the way in which nature also proceeds. For example, the famous Chinese principle of Ying and Yang: the idea that the acme of every natural process is also the beginning of its decline and the birth of its antagonistic movement. The human being, both as an individual and as a society, is interpreted according to this principle.

Although Judaism and Christianity adopted the idea that human life unfolds as a natural process, they introduced a new idea: the representation of the Final Judgment and the Second Coming. The whole of human history proceeded thus toward this end of time when all people will be judged and either doomed or accepted into heaven. 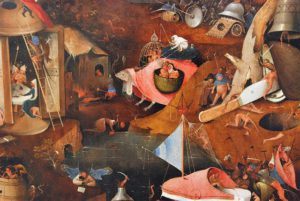 In modernity, this religious representation transformed into the secular idea of progress, of history that advances continuously towards better and better conditions. The idea of the Final Judgment was abandoned, and the representation of endless progress became the word of the day. In the 19th Century, progress meant not only material improvement but also moral growth: it was imagined that through better material conditions and through the development of society, people would become more rational, better, more responsible and tolerant. They would become morally mature.

This moral optimism was definitively abolished through the two World Wars of the first half of the 20th Century. These wars not only showed that man is still capable of the most evil deeds, but also that material progress and the development of knowledge can be easily used to create mass-destruction weapons. Progress could no longer be seen as something that happens necessarily, that leads spontaneously to moral advancement. On the contrary, it showed that civilized persons continue to carry within themselves primitive urges that cannot be uprooted.

Globalization and the Crisis of Values

On the other hand, at this time Europe ceased to be the highest civilization: the Americas, Asia, and Africa entered into historical awareness, claiming to be recognized as shaping forces of history. The phenomenon of globalization that started in the 19th Century was a two-way process: on the one hand, Western civilization exported its economic, social and political rationalism to the countries of other continents, and on the other, through the massive blending of mentalities that occurred, a profound moral relativism arose and a so-called crisis of values.

Traditional beliefs lost their importance because they were now understood as local values, which are irrelevant to other places. Even the so-called universal religions reached a stage of crisis, when their message, although adopted by people from different cultures, was transformed and adapted according to the local ideas. Thus, for example, Christianity has in today’s world hundreds of denominations, which, although calling themselves Christian, share only partially the same religious vision.

Globalization unites us economically and slowly generates a common planetary culture. The internet is the essential means of this culture allowing the instantaneous spread of information over the whole Earth. It seems that the most important pillars of this new culture are science and technology. It is possible then that scientific thinking also propagates beyond the borders of science, leading people to understand the meaning of their lives in a new way.

This is not equivalent to saying that all the humans on Earth would someday become scientists. But in the same way in which in the past people adopted a rational way of thinking and renounced the ancient religious views,  as a consequence of the development of human culture and education, sooner or later the contemporary man will adopt a scientific model of thinking.

The Age of Titans

Science ceased to be a simple knowledge of reality. The common understanding of knowledge is that there is an object, which the subject wants to know. Both the object and the subject would here be unchangeable. However, contemporary science no longer thinks in this way: it does not accept the idea that there is an object independent of a subject that the latter should appropriate in one way or another. Science operates today with models: it creates models of the researched objects.

These models are kept and utilized until they are useful. When the accumulated data contradict the existing model, it is relinquished and replaced with a more comprehensive one. The natural object exists thus only within the model that we have about it. Independently of the model, we cannot say anything about the object. Therefore, the latter is today considered to be dependent on the subject of knowledge. This way of thinking goes beyond the borders of science.

Metaphorically speaking we no longer live in a given, natural world, but the world that we know lives within us. This situation decisively influences the answer to the question ‘what is the meaning of the life we live today?’ It is impossible for us to admit a meaning of life that would be given to us from outside. We configure this meaning for ourselves.

This idea is true also in the framework of religion if we take into account that the religious discourse of all religions of the present is influenced by topics, beliefs, and values from different faiths, even if those who elaborate that discourse are not aware of it. The power that we have to manipulate life genetically and thus to create life-forms that never existed before or that long since have disappeared also transfers into the intellectual space of ideas: here too we can transform and manipulate the truth. To cite the idea of the German author Ernst Jünger, we have entered the age of the Titans.